IQ is a very good measure of intelligence -efficiency of the central nervous system- the validity of the measure is corroborated in many ways. Here is a summary.

Head size is an imperfect estimate of brain size. The correlation between IQ and head size is +0.2.

Brain size is correlated +0,45 with IQ. The brain size distribution is, like general intelligence (g), Gaussian (bell curve, figure 1 below).

A +0.45 correlation between general intelligence (= IQ) and brain size means that:

This correlation is not limited to homo sapiens: mice with bigger brains are smarter and find their way more quickly in a labyrinth.
University students, whose average IQ is significantly higher than the national average, have a bigger brain (as a mean).

Figure 2: Cranial Capacity of Cambridge Students Aged 19 to 24, by Grade.

Some cranial capacities of famous geniuses …

How to understand a +0.45 correlation between general intelligence and brain size?

What do you notice?
1. On average, the value of an intake of 1400ml is greater than that of 1200ml.
2. This is not true in all cases: it is possible that a 1200 ml take is very valuable, simply because it is very dense in 500 notes and jewels, for example. Conversely a catch of 1400ml can be of little value because more dense in notes of 5 and 10 euros. 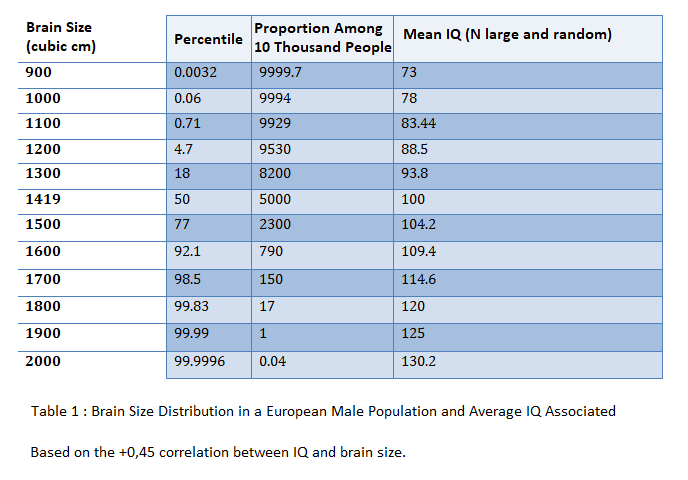 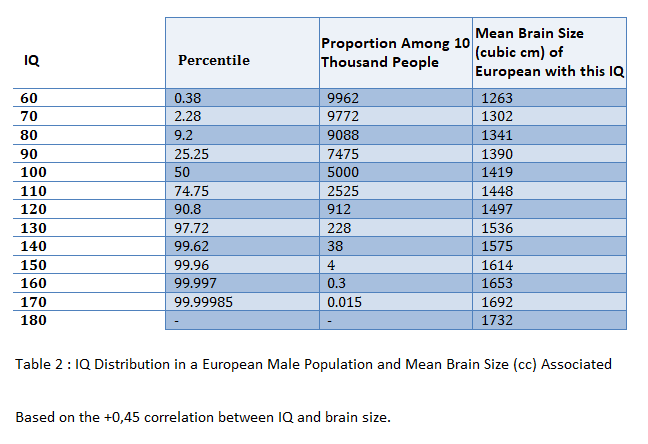 Myopics have an IQ of about 7.5 points above the average. Myopia is homozygous recessive. The myopia genes seems to be on chromosome 11. The eyes are extensions of the brain. It seems that the myopia genes modulate both brain size and eyes size. Myopic people have a brain and eyes bigger than average. This is the characteristic of myopia: The eyes are too big so that the picture is formed at the front of the retina, which must be corrected by biconcave glasses.
Heterozygote carriers of a single gene of myopia are not myopics and are not wearing glasses, but they have some intellectual gain, of lesser amplitude than the homozygous myopia.

Conversely, hyperopia (eyes too small) is correlated negatively with intelligence. 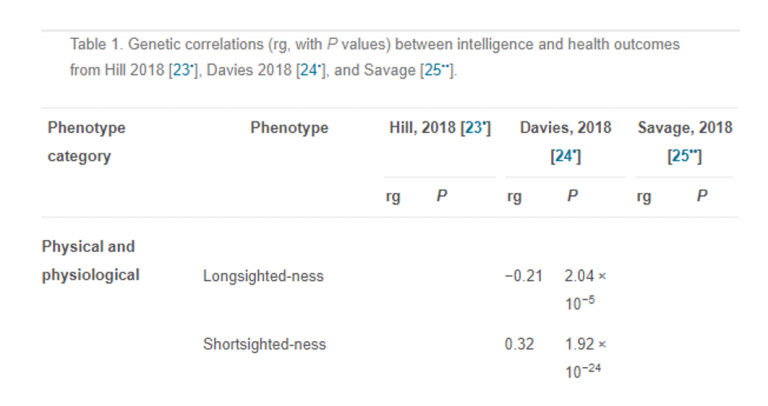 Deary I. et al. (2018) « What genome-wide association studies reveal about the association between intelligence and physical health, illness, and mortality ». 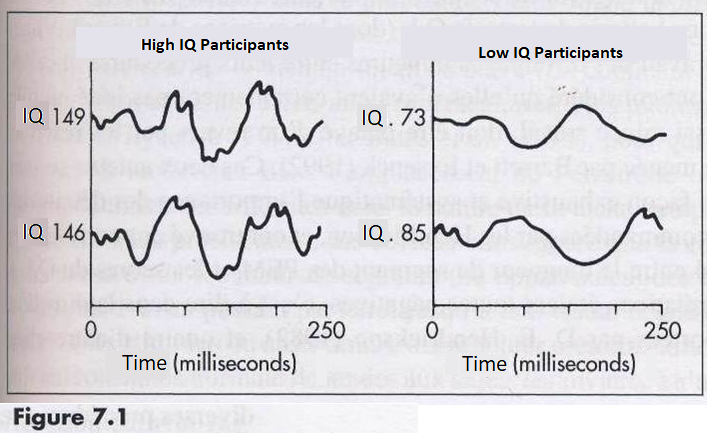 IQ is correlated:
-with the complexity of the waves at the EEG.
-with the alpha waves frequency.
Evoked potentials recorded with EEG.The score used is the length of the first 4 brain waves E1 to E4 (figure below)This score is smaller in bright individuals and higher in less intelligent individuals.

In other words: the information transmission is faster in bright people and less in less intelligent individuals.

Correlation of -0.7 to -0.8 between IQ and GMR (glucose metabolic rate)

-> Analogy with a computer:

-a weak computer arrives more quickly to saturation of its processor.

If now we subjectively calibrate a difficulty level, for example to succeed a cognitive task in 75 percent of cases what will be defined as a difficult task:

In this case, IQ is correlated positively with GMR, mean that higher IQ brains can reach higher glucose metabolic rates, if needed.

Analogy with a computer:

-If a less powerfull computer runs at 80 percent of its capacity (threshold subjectively fixed as « difficult task »), it will accomplish a smaller task, achieve a lower processor speed and consume less.

-When a more powerfull computer runs at 80 percent of its capacity (subjectively referred to as a « difficult task »), it will accomplish more difficult tasks because it is able to achieve higher processor speed by consuming more.

Correlation of +0.4 between nerve conduction velocity and IQ. 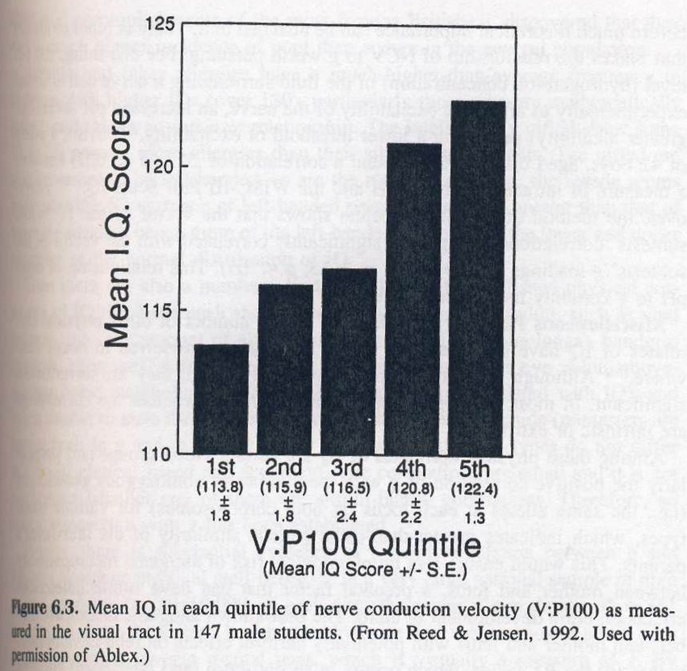 A light is flashing in front of the eyes, a device measures the time it takes for the message to reach the centers of vision in the back of the brain. This speed is correlated (+0.4) with IQ -> Better nervous myelination in high IQs

Reaction time is correlated with IQ, as both are signs of efficiency of the central nervous system.

Reaction times are measured as follows: Someone is placed in front of a small lamp that will light. Whenever he does, he simply presses the button in front of him as quickly as possible.

It is a sign of the efficiency of the nervous system since it is in a way a basic treatment of informations. Reaction times are measured in milliseconds. 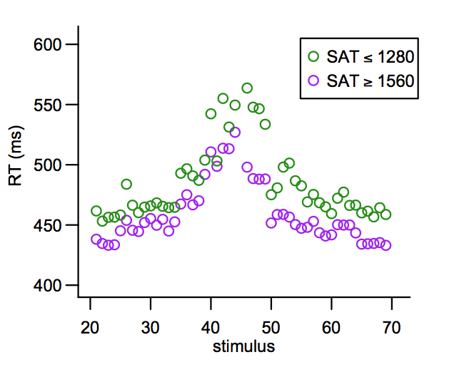 Below: SRT for normal IQs and IQs below average.
Lower IQs have longer reaction times with greater variance (SDRT), since from time to time they produce much slower reaction times, which increases the mean and the variance. 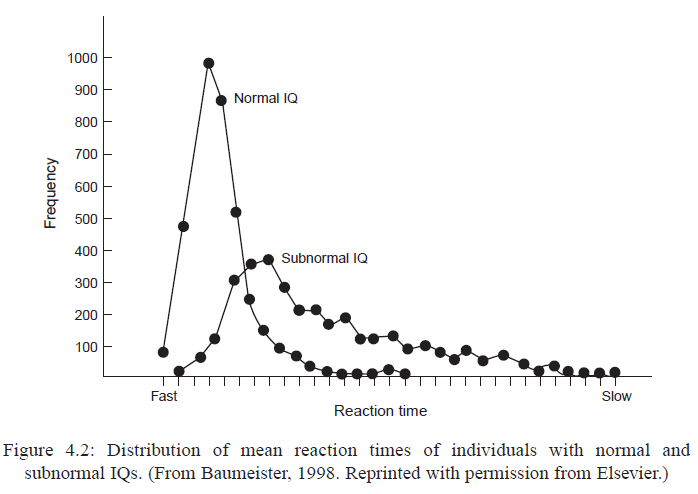 Simple reaction times are faster between 20 and 30 years, in agreement with the highest intelligence and the highest brain size of this period of life (see FAQ intelligence). 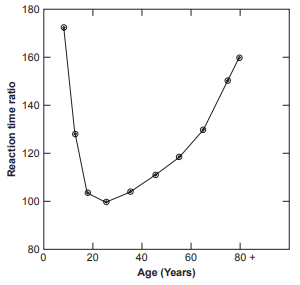 Surprising as it may seem, there is a positive correlation between IQ and fineness of the auditory spectrum, ie the ability to distinguish closer sound tones. These tests are performed as follows: sounds of different frequencies are emitted. Gradually, we bring the sounds closer by asking the subjects to designate the higher sound. Correlation between g and the fineness of the auditory spectrum underscores the ubiquity of g in all brain processes and allows us to understand why all major composers, for example, were individuals with IQ around 165 (Cox).

There is also a positive correlation between IQ and the fineness of the visual spectrum, ie the ability to distinguish closer colors. These tests are performed as follows: different color frequencies are presented. Gradually, we bring the colors together by asking the subjects to designate the two colors and the border between them.

The higher the IQ, the more individuals are able to distinguish nearby color tones.

« Inspection time » measures the speed of processing visual or auditory information. These measures are correlated +0.7 with IQ.

In this type of test, two bars of unequal length appear on the screen for a short period of time (in milliseconds). We then asks the participant which was the longest bar, the one on the right or the one on the left? 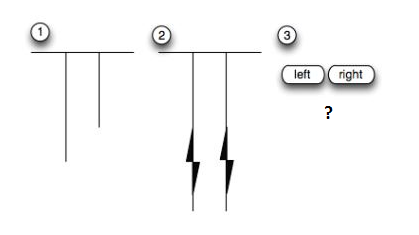 ESR (erythrocyte sedimentation rate) is an indirect measure of inflammation level. Several studies have already shown an inverse association between level of inflammation and intelligence. A high ESR is also a prognostic factor for cardiovascular disorders later in life. 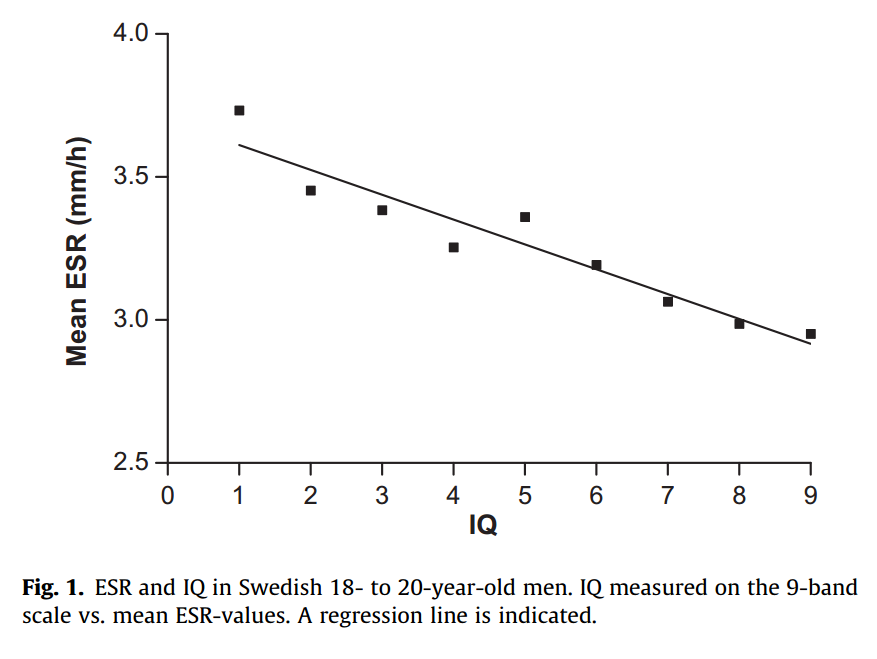 Smarter individuals have a larger pupil, even in a « basic », passive condition.

This would be related to the activity of the locus coeruleus (LC) and the noradrenergic system (LC-NS for Locus Coeruleus Norepinephrin System). Pupil size is generally a good estimate of LC activity. LC, which has projections throughout the brain and central nervous system, releases norepinephrine which facilitates the capture of important sensory information and the suppression of responses to small stimuli.

A LC-NS deficiency leads to cognitive impairment and attention. 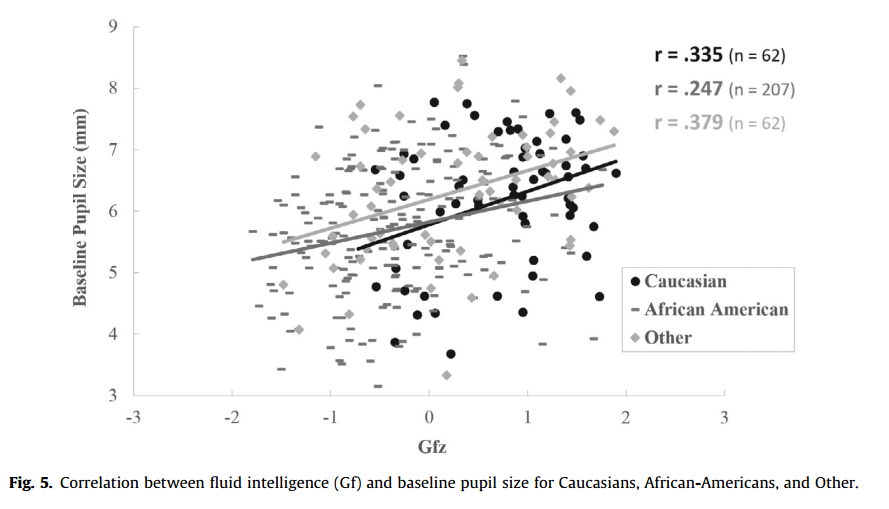 There is a positive correlation between telomere length and intelligence. Intelligent individuals age more slowly, which explains their higher life expectancy. Low intelligence is very clearly a risk factor for accelerated aging.

A, B, C, E, F: Telomere size for tertile 1, 2 and 3 (tertile 1 = best results) at different intelligence tests.
D: Size of the telomeres according to reaction times. Smarter individuals have a faster reaction time. 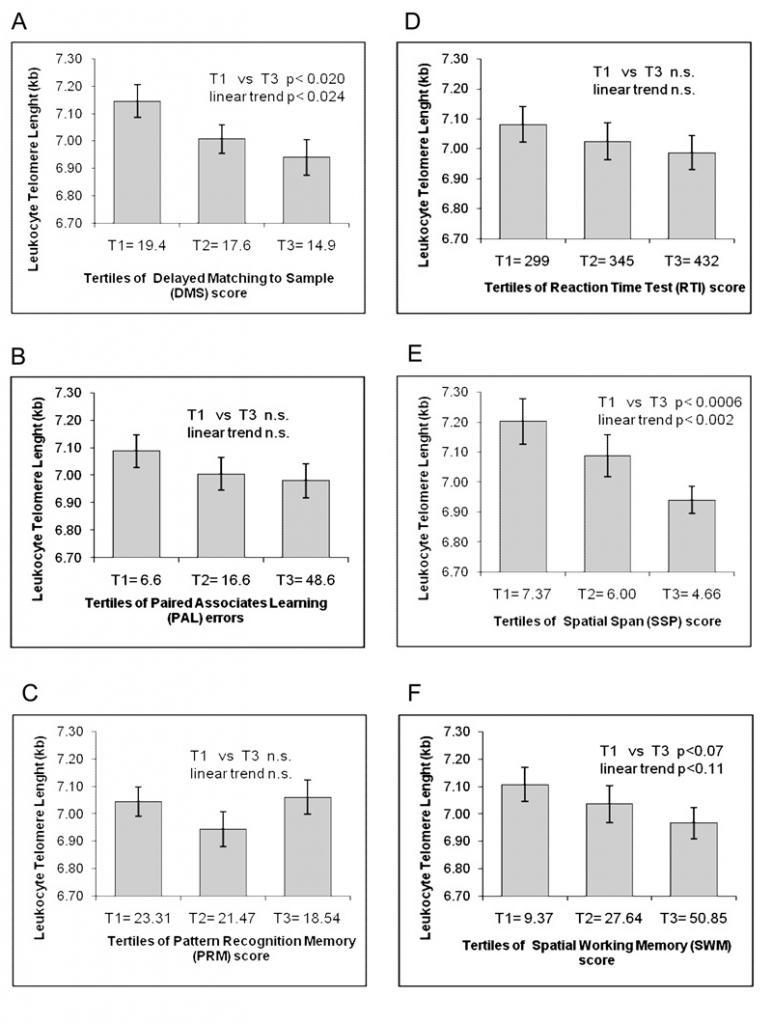 Figure 1: Biological age at age 38 according to intelligence (in SD) in early childhood 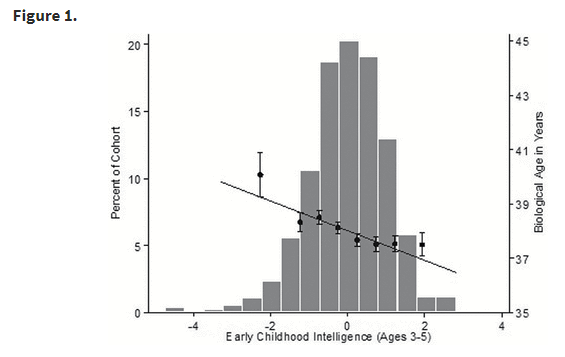 Table 3. 1. Correlations between IQ and earnings

Table 3.3. Effects of IQ on earnings

Table 3.6. Correlations between intelligence and trainability

A lower IQ is linearly associated with higher violence in the general population. 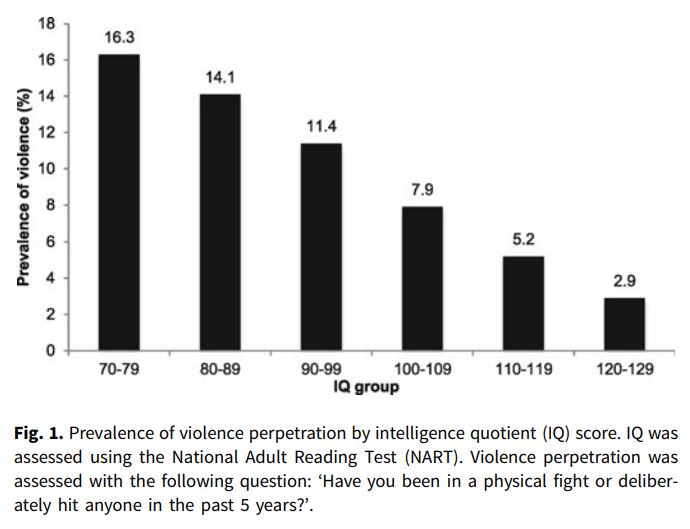 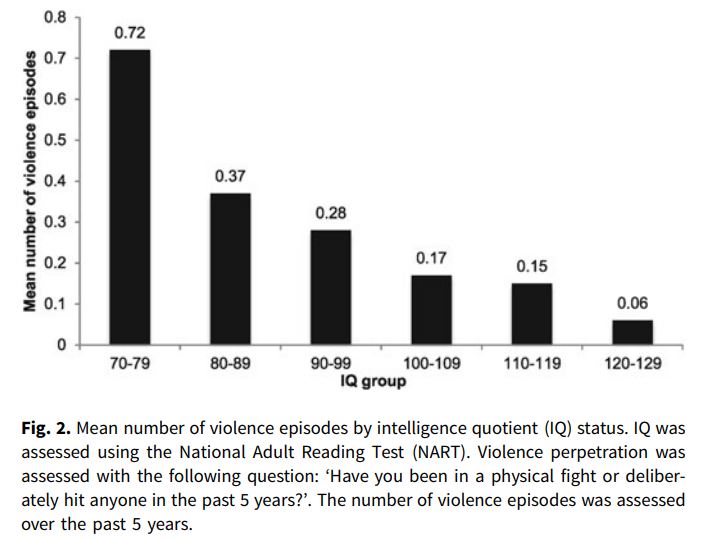 2.9. IQ measured at 13, predictive of many subsequent achievements 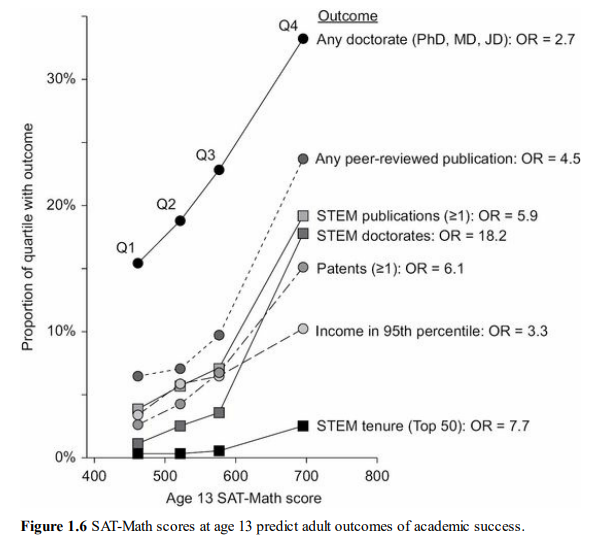